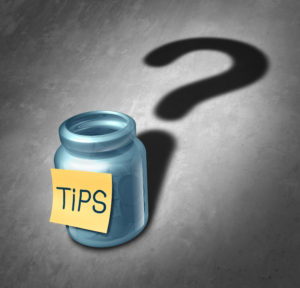 Beginning in 2021, New York employers will no longer be able to pay their employees below the minimum wage and take a tip credit for tips that are received by the workers to satisfy wage requirements. This applies to all employers who are covered by New York’s Miscellaneous Industries and Occupations Wage Order, which requires workers to be paid the full wage not counting any tips received. The philosophy of tip credit is that the workers are already making enough money when taking their tips into account, so the business doesn’t feel the need to pay them a higher wage. While a good idea in theory, in practice this credit system does not properly account for individual differences in tips between workers, and this has resulted in numerous issues including workers not being paid properly and even business malpractice. New York State is working to remedy this problem through an intensive investigation as well as new laws. In 2020, the tip credit is being reduced by 50 percent on June 30, and it will be eliminated by the end of the year. New York is not the first state to abolish this system. It has already been made illegal in seven other states. The elimination of the current payment structure in New York State is expected to be enacted in two parts, the first part centering on miscellaneous industries and the second being focused on hospitality industries.

Employers in New York State have been concerned for over a year about whether New York will enact laws hampering their ability to apply a tip credit on the wages of workers on their payroll who earn tips. These concerns stem from Governor Andrew M. Cuomo’s 2018 State of the State address, which was directed towards the New York State Labor Commissioner. Cuomo encouraged the Commissioner to look at the effect these credits have on workers. Following more than a year of research, the New York State Department of Labor (NYSDOL) released its 11-page report over New Year’s break. The report stated that credit should be eliminated for all employers who are subject to the Minimum Wage Order for Miscellaneous Industries and Occupations. The Commissioner’s Order covers around 70,000 tipped employees, according to the NYSDOL report.

Governor Cuomo has stated that he plans to implement NYSDOL’s recommendations. Over the course of 2020, employers who are subject to the wage order will have to phase out tip credit. This however does not apply to employers who are part of the hospitality industry. What this means is that hotels, lounges, bars and restaurants can continue applying credit to their employees’ wages. This is only allowed if the employer properly satisfies all of the requirements for claiming a credit.

The current law in New York State requires that employers pay their workers a wage that is based on a number of factors including geographic location of the work itself and at times the size of the business. To further complicate matters, the wage rate differs across New York State. New York City, Long Island and Westchester, and the rest of the state all have different minimum wages. The NYSDOL originally established credit laws, and has now stated that the payment system is too complicated to understand and should be eliminated. All businesses outside of the hospitality industry, agricultural industry, building services and certain non-profits will have to apply these new rules. This includes businesses such as barber shops, car washes, nail salons, aestheticians, moving companies and parking lots. Before the new law was enacted, these businesses could apply a tip credit to their workers’ wages based on a complex formula that involved figuring out the average number of tips the worker received each week.

After Governor Cuomo’s statement, the NYSDOL held seven different hearings across New York. These lasted around 40 hours, had an attendance of approximately 3,100 people and included over 700 speakers. Testimonies were heard from not only the workers themselves but also the businesses they worked for and also stakeholders. The NYSDOL also received written comments from over 3,000 people via letters, petitions, postcards and emails. The majority of the messages came from nail salon workers and car wash attendants.

One point that was raised in these hearings was that employers were worried that eliminating the credit system would reduce profit margins and increase costs. Many businesses are already burdened by an increasing minimum wage, insurance, rent, property taxes, utility costs, FICA and numerous other regulations. However, the NYSDOL recommends eliminating credit for workers because this would provide them with a more predictable monthly wage that is not as affected by factors beyond their control like the weather, economy, seasons and customer preference. The amount of tips a worker receives can vary drastically from day to day, and the credit system does not properly account for this. The NYSDOL also explained that the complex payroll regulations regarding credit often made it hard for workers to understand their payments. Removing credit regulations will streamline the payment process and make things easier for both the business and the worker. There is also the issue of underpayment and even intentional wage theft that the employer can get away with due to the complexity of the regulations. Because workers are often confused by how their payment is calculated with the credit system, it’s easy for some businesses to take advantage of this and pay them less than they actually earned. Intentional illegal acts like these are sometimes covered up as errors in calculations and so the worker does not pursue any action.

There have been questions about whether or not keeping credit for hospitality employers is a safe idea. The consensus currently is yes, in light of the large number of responses the NYSDOL received from employers at the hearings. The NYSDOL acknowledged the cost pressures that face hospitality employers in its report. The hospitality industry differs from the way miscellaneous industries function, and this must be taken into account when considering the current changes to the credit system. The NYSDOL is utilizing a step by step approach, rather than changing the entire credit system all at once, in order to avoid unnecessary complications. The issues of credit regulations and FICA are expected to resurface in 2021 when the current wage rates are to be debated again.